Design of the Raspberry Pi Radio

Design of the Raspberry Pi Radio


In this installment I will try and outline the main components that take part in the Raspberry Pi radio.

Of course the most significant part is the Raspberry Pi. This is responsible for the actual radio playback, streaming down and so on. But there are some other components that make it all possible.

On the left hand side, there is a band selection knob. This was used to switch between SW bands, 6 of them. I wanted to use this as a channel selection control.


When I examined the channel selector, I realised that I could represent the 6 states it has by using 3 bit digital inputs.

The second input I wanted to use was the On/Off button at the front of the radio. Rather than cutting the power supply, this will now function like a mute button. The circuits are not being shut down but this will stop the playback (and more).

So I have the following controls available to me:


The On/Off is another single bit digital input.

I decided to A/D sample the volume control to control the actual volume of the radio. Later I will explain the attractiveness of this.

The board I used has sufficient I/O pins to input the channel selection, on/off switch and an A/D input for volume control.


Writing the C++ code for Arduino was a lot of fun. The Arduino system, both software and hardware, works really well and I can say that pretty much everything worked straight out.

The next hurdle was to connect the Ardunio to the Raspberry Pi. Both systems support the I2C protocol. I2C protocol is a serial two wire protocol which allows different chips talk to each other over short distances. Arduino platform supports I2C and Raspberry Pi supports that too, with some tweaks.

The main problem on the I2C front was the voltage levels. The IO pins of Raspberry Pi operate with 3.3V logic. The Ardiuno works on 5V. If I tried to connect them directly, that would most definitely fry the Raspberry Pi.

So I used a bi-directional level shifter. This is a very simple but very clever piece of circuit that can translate the logic levels of the systems back and forth.

You can make your own bi-directional level shifter but that might require eyeballs size of watermelons. The surface mounting tiny components were too small for me to work with so I actually purchased one that was made by some robot.

Finally, I designed a power supply to power the entire system using mains without any need for any power adaptors and so on.

Here is a view of the built radio: 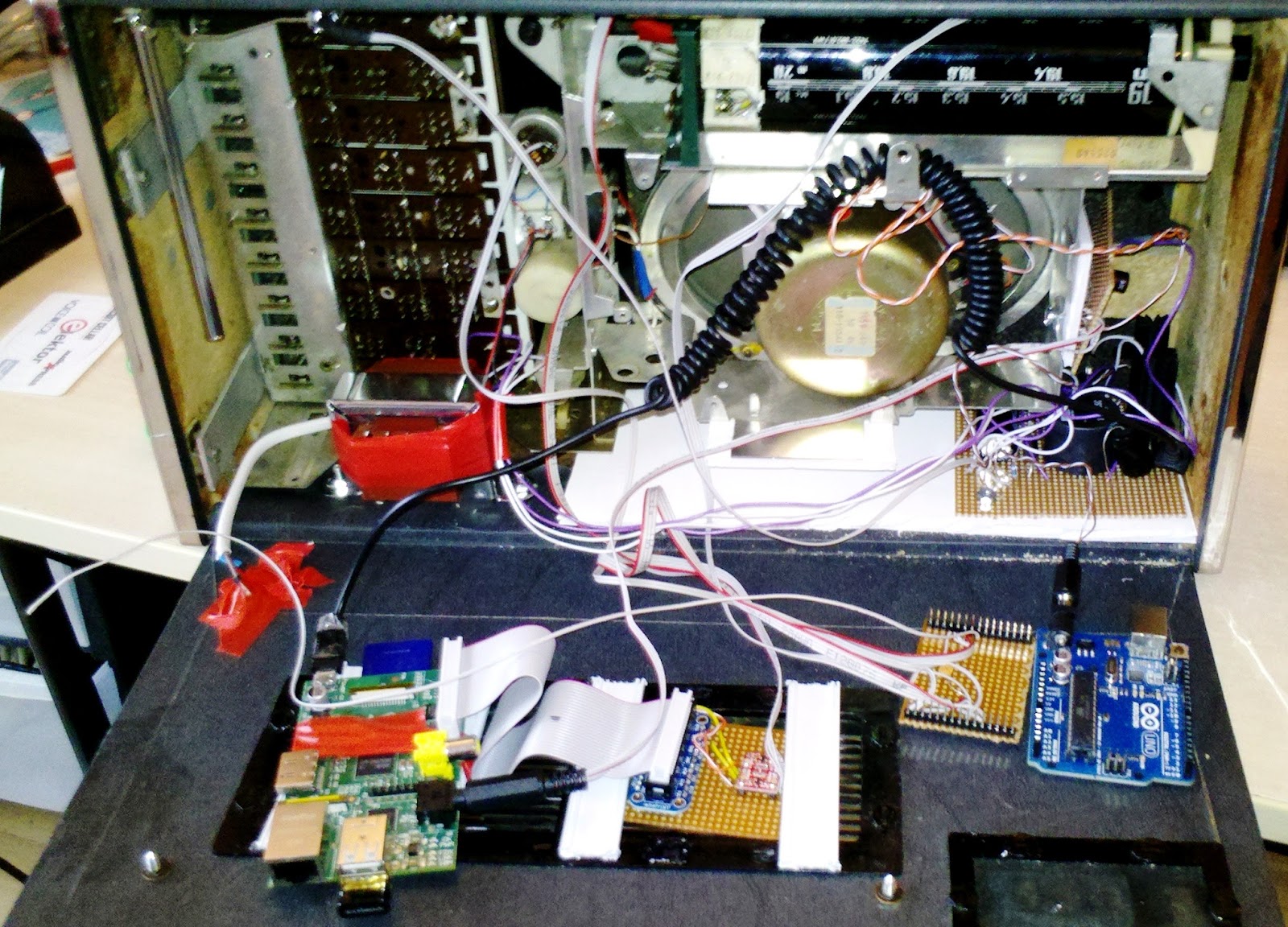 Software
OK, I am using the official Raspberry Pi Raspbian as the Operating System.

First and foremost I needed a radio player program. The excellent Media Player Daemon (MPD) is an excellent choice. This supports a very large number of formats. Because it is a Linux daemon it runs in the background and you can write programs (MPD clients) to control the playback, playlists.
http://mpd.wikia.com/wiki/Music_Player_Daemon_Wiki


So I wrote a C++ program, the radio controller, which talks to Arduino on the I2C protocol and controls the MPD using the MPD protocol. MPD Protocol is a socket/text based protocol.

Typically, my program reads the inputs from the radio controller, such as volume level, channel selection and convert these to commands to issue to the Media Player Daemon. So when I twist the channel selection, this translates to a digital input to the Arduino and this is then picked up by my radio controller software and this issues the correct playlist control commands to MPD.

MPD starts up when the Raspberry Pi boots up and so does my radio controller program.

Well there is no conclusion yet. My aim today was to outline the top level design. I would like to go into more detail in all of the points discussed and hopefully this will be something I will be doing in the following days/weeks.