Now that states are relaxing their Covid-19 restrictions, travelers are anxious to get back out on the open road, angling to make up for lost travel time caused by the pandemic to explore different corners of the United States. Luckily, summer is the perfect time for a road trip, and America has no shortage of epic roadside attractions to keep travelers excited, even along some of the most mundane stretches of highway. We rounded up eight of the most compelling landmarks across the country that should be locked into any traveler’s GPS.

The Jersey Shore has long been a summertime destination for residents of the Tri-State Area looking to catch some rays after a long winter. While the shoreline may be forever changed due to the wrath of Hurricane Sandy in 2012, one constant has been Lucy the Elephant. Originally part of what was known as the “Elephant Bazaar,” the 65-foot-tall, 60-foot-long and 18-foot-wide pachyderm was the brainchild of James V. Lafferty, a real estate speculator who in 1881 commissioned a Philadelphia-based architect to design a structure that would lure tourists. And the idea worked, with Lucy later being joined by two other similar wooden elephants erected along the shore. Now, more than a century later, only Lucy remains, making her not only the oldest roadside attraction in the country, but also the oldest surviving example of “zoomorphic” architecture (something that looks like an animal). Over the years she’s been home to a tavern, offices and a restaurant. Now, as part of her most recent transformation, the elephant with painted toenails is an Airbnb rental.

A road trip isn’t complete without a solid playlist, but what if instead of relying on Spotify or the radio, the roadway serenaded drivers? That’s exactly what happens along a quarter-mile stretch of Route 66 heading eastbound out of Albuquerque, New Mexico. Located between mile markers four and five, the roadway plays “America the Beautiful” whenever a vehicle drives over a series of rumble strips at exactly 45 miles per hour (a clever reminder for drivers to stay the speed limit). In a previous article about the roadway, Matt Kennicott, former director of communications for the New Mexico Department of Transportation, explains the attraction to Smithsonian magazine: “The road works by the simplest bit of science. All of the sounds and music notes that we hear in day-to-day life are just vibrations through the air. For instance, anything that vibrates 330 times in one second will produce an E note—a guitar string, a tuning fork or even a tire. To produce an E note with a car, we had to space the rumble strips such that if driven at 45 mph for one second, the car would hit 330 strips. A bit of math tells us this is 2.4 inches between each rumble strip. After that, it’s a case of breaking down the music into exact chunks of time and applying the same technique to each space depending on what note is needed and for how long.”

Finding an expanse of desert in coastal Maine may seem inconceivable. But, believe it or not, tucked away in Freeport, a former shipbuilding town located along Casco Bay, sits the Desert of Maine, a 40-acre stretch of glacial sand dunes that formed more than 10,000 years ago. Known as Maine’s “most famous natural phenomenon,” the dunes formed during the last ice age, at a time when massive glaciers covered what is now Maine. Over the centuries, as the glaciers expanded, they scraped the rocky layer buried underneath, whittling down the rocks and pebbles into a fine glacial silt. Eventually fertile topsoil covered the expanse, making the land a prime spot for farming. In 1919, a man by the name of Henry Goldrup purchased the property and turned it into a tourist attraction, which draws thousands of visitors annually to this day. Modern-day explorers can take part in either guided or self-guided tours of the property, which also houses an onsite museum, a restored 1800s farmhouse, a historic barn and more.

Some towns can lay claim to being home of a single superlative attraction, such as Cawker City, Kansas, home of the world’s biggest ball of twine, and Baker, California, the proud owner of the world’s largest thermometer. However, only one locale can take ownership of having the world’s largest collection of the world’s largest objects: Casey, Illinois. Located between St. Louis and Indianapolis, the single traffic light town is home to a number of objects listed in the Guinness World Records, including the world’s largest golf tee, rocking chair, mailbox, teeter totter, gavel and truck key. The attractions are all part of a hugely successful (pun intended) campaign by Casey native Jim Bolin called “Big Things, Small Town,” which he started in 2011 with a 52-foot-tall wind chime as a way to draw tourists to his hometown. And it’s working. Bolin estimates that roughly 2,000 tourists make a detour along I-70 each week to gaze at the larger-than-life objects.

Situated only a few miles west of Amarillo, Texas, sits one of the most iconic roadside attractions in America. Known as Cadillac Ranch, the public art installation comprised of ten partially buried Cadillac automobiles has been gaining rust and layers of spray paint since its debut in 1974 as an avant-garde art installation by San Francisco-based artists Chip Lord, Hudson Marquez and Doug Michels. The brightly painted collection of cars located along I-40 has served as the backdrop for numerous movies, TV shows and music videos, including a cameo in Disney Pixar’s animated film Cars as a mountain called “Cadillac Range.” Bruce Springsteen even wrote a titular song about it featured on his 1980 album “The River.” (Sample lyrics: “I'm gonna pack my pa and I'm gonna pack my aunt, I'm gonna take them down to the Cadillac Ranch.”) On Fridays throughout the summer, the ranch hosts the “Cadillac Ranch Food Truck Friday,” a weekly roundup of food trucks from around the Texas Panhandle. And don’t forget to bring a can of spray paint—painting is encouraged!

“One man’s trash, is another man’s treasure.” That old proverb rings particularly true at The Museum of Everyday Life. Housed inside a rickety old barn in northern Vermont, the museum is the invention of Clare Dolan, a local nurse and puppeteer who created this museum dedicated to the mundane in 2011 after cleaning out her barn and realizing that she had gadgets and gizmos aplenty, all of which were worthy of display. The result is a museum that makes a strong case for finding beauty in everyday objects, from safety pins to tattered matchbooks and keys. It also regularly hosts special exhibitions on single subjects. (Currently on display: “Frayed Knot: The Human Art of Tying and Trying,” an assortment of knots big and small.) After one visit, you’ll never look at your junk drawer the same again.

Although it was built less than 100 years ago as a roadside attraction, the Fossil Cabin has been dubbed “The World’s Oldest Building,” and for good reason. The circa 1932 cabin located five miles west of Medicine Bow, Wyoming, along Lincoln Highway, is comprised of nearly 5,800 fossilized dinosaur bones and is the creation of Thomas Boylan, a local cattle rancher. Fascinated by the sheer abundance of bones littering his land, Boylan originally intended to create a single dinosaur skeleton, but soon realized he had enough materials to build something even bigger: a cabin. With the help of his family, he constructed a 29-foot-by-19-foot cabin and opened its doors to the public. Soon word spread thanks to a series of postcards Boylan printed advertising the cabin as the “Como Bluff Dinosaurium” and the “Building that Used to Walk.” It even garnered a nod from Ripley’s Believe It or Not.

The Glass Outhouse Art Gallery is truly off the beaten path. Sandwiched between Joshua Tree National Park and Cleghorn Lakes Wilderness Area along California State Route 62, the gallery is home to an array of indoor and outdoor art installations, many of which might make you scratch your head. Case in point: the main attraction is a glass outhouse covered in one-way mirrors. Use at your own risk! Other equally enthralling sights include a giant Pepsi can, a fully furnished chapel that's open 24/7 (and has been the site of numerous weddings), a cemetery dedicated to the seven deadly sins and numerous metal sculptures made using found objects. Offering an air-conditioned reprieve from the desert, the indoor gallery is equally quirky and contains a revolving lineup of artworks by artists near and far.

Photo of the day 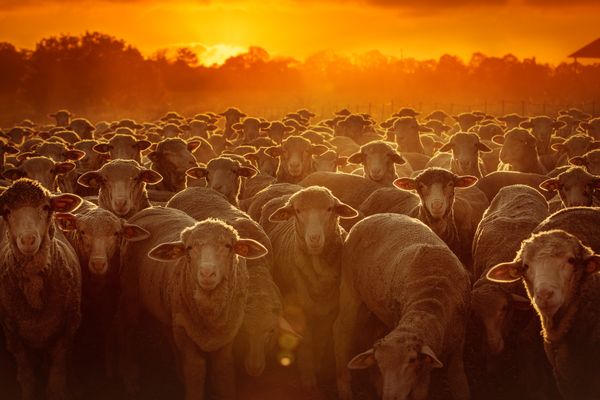 Sunset Over the Farm Photo of the Day»