Axial and Centrifugal fans: the most important differences to know

There are many industrial fans manufacturers, but what do they do really. In reference markets, the term “industrial fan” does not have a clear definition and in this article we want to explain what are industrial fans, and answer to many other questions.
There are only two basic types of indutrial fans: Axial Fans and Centrifugal fans. The other many fans and blowers fall under various classifications like Industrial Blowers, Industrial Ventilation Fans, Exhaust Blowers, Industrial Exhaust Fans, hvac fans and blowers, and many others terms are used to define a Centrifugal Fan or an Axial Fan 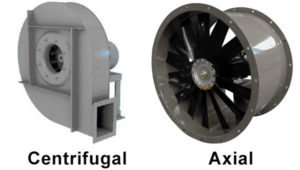 An axial fan is one in which the extracted air is forced to move parallel to the shaft about which the blades rotate. Centrifugal fans extract air at right angles to the intake of the fan, and spin the air outwards to the outlet by deflection and centrifugal force. The impeller rotates, ausing air to enter the fan near the shaft and move perpendicularly from the shaft to the opening in the fan casing. The axial fans replace in certain fields of application the centrifugal fan from the functional point of view, operating at higher specific speeds with lower diameters.  An axial fan, on equal flow and pressure, has the following differences compared to a centrifugal one:

The most significant data of this comparison are the weight, the speed of operation and the noise. The comparison of the speed of operation indicates that the same flow and pressure characteristics are obtainable by axial fans in higher operation and peripherals speeds than those of the centrifugal fans. Since there is a limit to the stresses in the rotating bodies, and then to their peripheral speeds, we can safely say that the pressures of a certain amount are more easily obtained with centrifugal fans instead of axial fans. The axial fans are much more noisy, it often happens that to contain noise the axial fan requires the use of silencers, where there would be no need for a centrifugal fan. 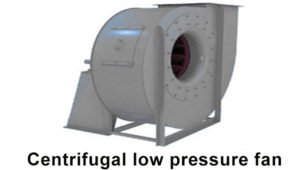 These negative aspects are opposed to a lower weight, less space and lower cost. Use of axial fans in the low pressure range (up to 100 mm H2O) is much more frequent. Yields reached by axial fans, especially if of considerable size, are very close to those obtainable with the radial fans. Another element that usually work for the use of an axial fan is the parallelism of the two suction and discharge nozzles and therefore its easy insertion in the plant, where the axial fan becomes nothing but a piece of the pipe, while the centrifugal fan requires a more expensive solution.A centrifugal fan can have a suction inlet (SWSI), or two suction mouths (DWDI). With the same number, diameter, rpm, specific weight and the total pressure, the DWDI fan have double capacity and absorbs twice the power compared to the single inlet. Not always the width of the double suction spiral is twice that of the single inlet. 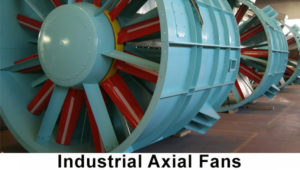 Tubeaxial fans have a wheel inside a cylindrical housing, with close clearance between blade and housing to improve airflow efficiency. The wheel turn faster than propeller fans, enabling operation under high-pressures 250 – 400 mm WC. The efficiency is up to 65%. Vaneaxial fans are similar to tubeaxials, but with addition of guide vanes that improve efficiency by directing and straightening the flow. These fans are designed for commercial and industrial applications where large volumes of air are required at moderate to high pressures. Vaneaxials are typically the most energy-efficient fans available and should be used whenever possible. Uses include heat, smoke and fume removal, process drying, comfort and process cooling and general ventilation. Propeller fans usually run at low speeds and moderate temperatures. They experience a large change in airflow with small changes in static pressure. They handle large volumes of air at low pressure or free delivery. Propeller fans are often used indoors as exhaust fans. Outdoor applications include air-cooled condensers and cooling towers. Efficiency is low.

A particular type of axial fan is the bifurcated one, that can be directly coupled or driven by transmission. The purpose of this type of construction is to bring out of the flow the electric motor and the supports. This may be desirable for reasons like temperature or due to the corrosive properties of the delivered gas. They are in fact intended for installations for the extraction of hot fumes, humid and greasy atmospheres, in which the engine must be completely isolated from the fluid conveyed. In the case of high temperatures it cross ventilation of the electric motor (or the supports) can be provided.Such as are used for the extraction of air from kitchens, painting booths, furnaces, foundries. The choice of an industrial fan requires a deep examination of the characteristics of the system in which the fan is intended to be installed, as well as the knowledge of the technical characteristics of the fan that you want to buy. An exchange of technical information between the buyer and supplier it is often necessary to reach a purchase the most correct as possible, consistent with the actual buyer needs. It is the duty of the seller not only to sell a machine, but to understand the real needs of the client, that is to define the flow rate and the pressure for which the fan must be properly chosen.

At the same time the customer has to determine the actual characteristics and needs of his system.The fan is required to convey a certain flow of fluid that can be expressed in volume or weight per unit of time at a certain pressure, usually expressed in Pa or mmH2O, required to overcome the load losses (resistances) that will occur in the circuit where this fluid will circulate. The fan must transmit to the fluid that crosses a certain amount of energy, energy that it receives from the electric motor. This transfer of mechanical energy to electrical energy is not the same (if not the yield would be 100%). This is the case with a fall of return. The mechanical energy output from the motor to the fan is always higher than that which makes the fan to the transported fluid. The relationship between the second and the first energy is the fan efficiency

The main parameters, characteristic to a fan, are four in number

The capacity is the quantity of fluid moved by the fan, in volume, within a unit of time, and it is usually expressed in m3/h, m3/min., m3/sec.

Where:
pd= dynamic pressure (Pa)
y=specific gravity of the fluid(Kg/m3)
v= fluid speed at the fan opening worked by the system (m/sec)

The efficiency is the ratio between the energy yielded by the fan and the energy input to the fan driving motor.

The capacity (V) is directly proportional to the speed of rotation, therefore :

The total pressure (pt) varies as a function of the squared ratio of the speeds of rotation; therefore:

The absorbed power (P) varies as a function of the cubed ratio of the speeds of rotation therefore: